The Crest technical team have leveraged their diverse knowledge of the geology of central Newfoundland and this switch in exploration mindsight early on, to help build Exploits Discovery Corp. With the largest foothold in the Exploits Subzone, the Crest and Exploits staking syndicate delivers increased shareholder value to both companies on the jointly owned PB Hill Property. 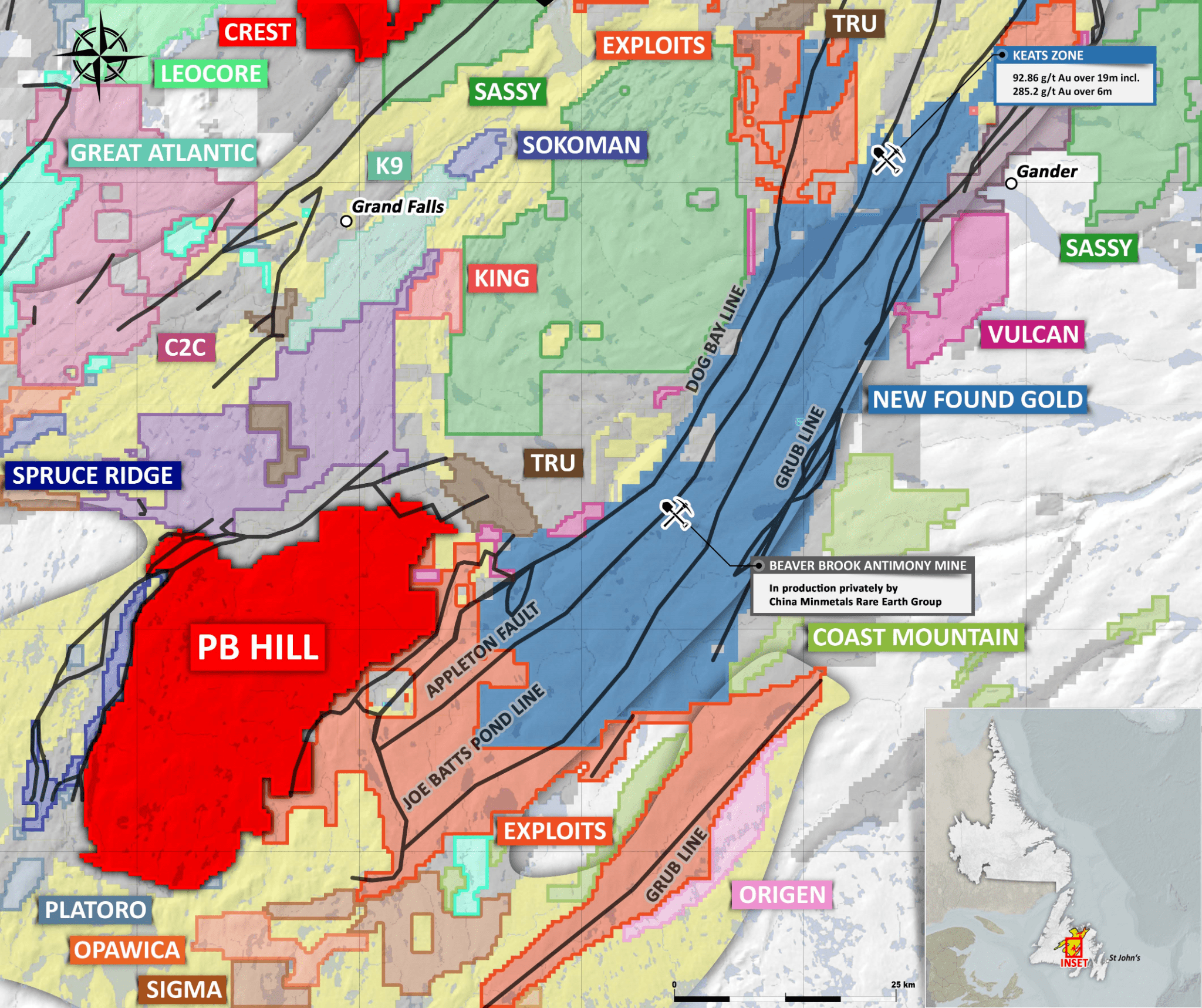 About The PB Hill Property

The PB Hill Property is situated in the siliciclastic sediments of the Davidsville Group, in the Exploits Subzone Gold Belt, Newfoundland. The Project encompasses a total land area of approximately 1,986 km² (198,600 Ha). The project has had very little work completed due to the majority of focus revolving around base metal exploration; Exploits sees this as an opportunity for discovery. The perimeter of the project has undergone multiple exploration programs over the past 75 years with the following government documented results:

Exploits and Crest believe that there is major upside potential for additional discoveries in the Exploits Subzone with the application of the new epizonal geological model. With most areas that stray from major highways virtually unexplored, we believe there is reason to continue to leverage our increased geological understanding in the area and create shareholder value.

All Mineral Occurrence Data System codes (MODS) listed above can be found at the following Newfoundland and Labrador Department of Natural Resources Link: https://gis.geosurv.gov.nl.ca/mods/mods.asp

The Crest/Exploits staking syndicate is a 50/50 per-cent Syndicate agreement where Crest has provided the Geological Intellectual Property for the staking thesis, and Exploits has funded the staking expenses.  Exploits will receive the first 1.2 times cost return on investment and further benefit will be divided on a 50/50 per-cent basis.

With five permitted drill targets, ample cash reserves, and a drill working and committed through the summer 2021, Exploits is positioned for discovery.

Exploits believes that the Exploits Subzone Gold Belt, which runs 200 km from Dog Bay southwest to Bay d’Espoir, has been neglected since the last major exploration campaigns in the 1980s. The last 40 years have seen incremental advancements in the understanding of gold mineralization in the camp. The sum of this knowledge is now coming together in discrete and effective exploration models that have delivered results including New Found Gold’s 2019 discovery hole. The Exploits Subzone and GRUB regions have been the focus of major staking and financing since late 2019.

The team at Exploits, with significant local experience and knowledge, have studied the entirety of the Exploits Subzone and surrounding regions, and have picked individual land packages for staking or joint venture, where there are opportunities for world class discoveries and mine development. Exploits intends to leverage its local team and the larger shift in geologic understanding and become one of the most extensive explorers in the Exploits Subzone.