Exploits Discovery Corp. (OTCQB: NFLDF) (CSE: NFLD) (FSE:634-FF) is pleased to announce that it has awarded its phase one 2021 diamond drilling program to Majors Contracting Ltd. of Deer Lake, Newfoundland.

Michael Collins, President & Chief Executive Officer of Exploits, commented: “The Exploits Team is very excited to begin our drill program in Newfoundland. In six short months we have developed five high priority drill targets, and continue to generate a pipeline of additional high quality drill targets. The targets are based on Goldspot’s machine learning process, field prospecting and geophysical testing of the large scale deep seated geophysical structures that are extremely important for the development of orogenic gold discovery in the Exploits Subzone.”

3.5 km west of New Found Gold’s Keats Zone is the Exploits’ Schooner prospect. This was the first high priority target identified by GoldSpot Discoveries. The Schooner Fault is parallel to the gold bearing Appleton Fault which hosts NFG’s Keats Zone.  Drill targeting here is focused on a Schooner Fault splay, (where the fault splits in two), and two secondary fault intersections.

Details about GoldSpot Discoveries targets at Schooner can be found: https://exploitsdiscovery.com/exploits-receives-first-goldspot-discoveries-corp-exploration-target/ 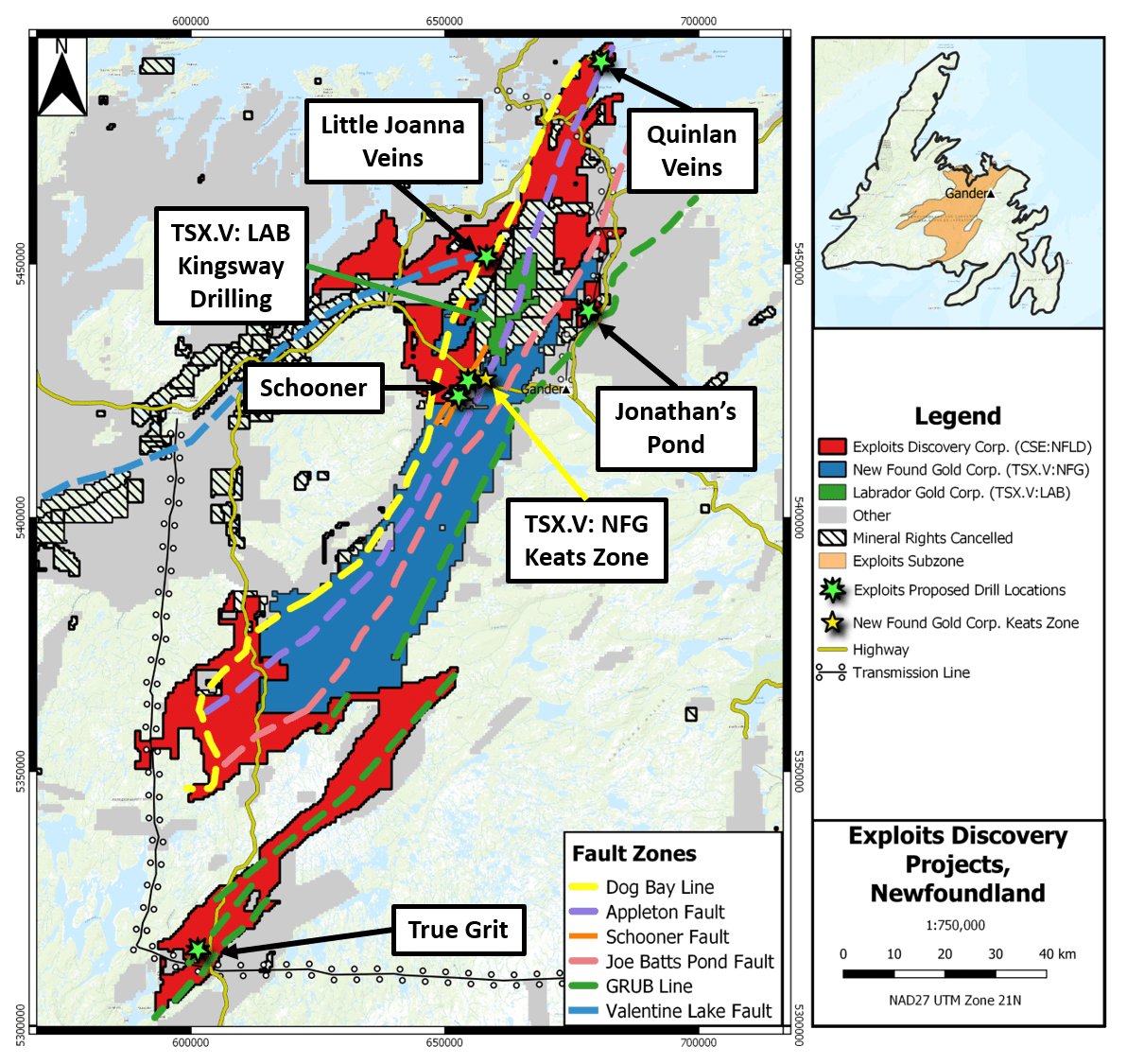 Figure 1: Map of the Exploits Discovery claim boundaries with the locations of the approved Little Joanna Veins, Schooner, and True Grit drill permits, as well as the pending Jonathan’s Pond and Quinlan Veins drill applications.

The Little Joanna prospect returned our highest grade visible gold in outcrop from quartz veins averaging 30cm in width, uncovered up to 20m in strike before becoming buried under overburden.

For more information about the Little Joanna prospect, visit: https://exploitsdiscovery.com/exploits-visible-gold-samples-assay-194-g-t-gold-at-little-joanna-dog-bay-project-newfoundland/

The Quinlan Vein prospect is located on a secondary structure splaying off the Appleton Fault. There are multiple 50-70 centimetre-wide quartz veins over a 25m wide zone, currently exposed 5-20 metres in strike before diving under overburden. Visible gold was discovered as fine grains in crack seal fractures and as fine to coarse grains in the quartz veins. Trace sulphide mineralization is also present in the quartz veins as pyrite, chalcopyrite, galena, and sphalerite. The veins are milky white with sections of vuggy and crack seal textures, which are typical of epizonal, orogenic gold deposits. Structurally, the veins are situated within secondary fault structures, associated with the Appleton Fault zone, that were highlighted by GoldSpot Discoveries’ geophysical analysis.

For more detail on the Quinlan Vein prospect, visit: https://exploitsdiscovery.com/exploits-visible-gold-outcrop-samples-assay-61-3-g-t-gold-and-189-g-t-silver-at-the-quinlan-veins-within-the-dog-bay-gold-project-newfoundland/

Near the southern end of our properties lies True Grit, it is adjacent to the GRUB line fault and has seen some historical drilling (including 0.60 g/t Au over 117m from surface) plus new VTEM geophysics and an SGH soil survey completed within the past five months . The soil and geophysical results indicate that the historical drilling was in the wrong orientation and missed the best targets.

Information about our work at True Grit can be found here: https://exploitsdiscovery.com/exploits-reports-sgh-soil-grid-and-outcrop-sampling-results-at-the-true-grit-gold-project/

Approximately 30km southwest from Little Joanna is Jonathan’s Pond. Exploits consolidated our property here in late 2020 with land acquisition from New Found Gold, in exchange for 6.5M shares (9.9% of the company at the time). This project has received the most historical work of any property in our portfolio, with historic rock grab samples returning up to 29 g/t Au and 700 g/t Au. The property features a large, distinctive quartz vein exposed for over 200m, and is bound by the JBP and GRUB line faults. The Company has also identified the JP Demagnetized Zone which stretches over 2 km, parallel to the structures known to host visible gold at the JP Veins.

More information about Jonathan’s Pond can be found here: https://exploitsdiscovery.com/exploits-consolidates-the-johnathans-pond-project-with-acquisition-from-new-found-gold/

Exploits believes that the Exploits Subzone, which runs 200 km from Dog Bay southwest to Bay d’Espoir, has been neglected since the last major exploration campaigns in the 1980s. The last 40 years have seen incremental advancements in the understanding of gold mineralization in the camp. The sum of this knowledge is now coming together in discrete and effective exploration models that have delivered discoveries such as New Found Gold’s 2019 discovery of 92.86 g/t Au over 19.0 metres near surface. The Exploits Subzone and GRUB regions have been the focus of major staking and financing throughout 2020, with increased exploration activities forecasted in the area moving into 2021. Exploits is financed and with four of five drill permits in place for an extensive drill program in the Spring of 2021.