Exploits Discovery Corp. (OTCQB: NFLDF) (CSE:NFLD) (FSE:634-FF) is pleased to announce that it has entered into an agreement to acquire 100% interest in the Hicks – Dog Bay properties (the “properties”) to consolidate the Dog Bay Gold Project (the “project”) for 550,000 Exploits shares. The claims are subject to a 2.0% Net Smelter Royalty to one of the underlying vendors of which 1.0% may be bought out for $1 million at any time. This land acquisition contains several significant historic gold showings and will increase the land package by 4.5 km2.

Michael Collins, Chief Executive Officer of Exploits, comments, “The acquisition of these claims solidifies the Company’s land position on the northeastern end of the Port Albert Peninsula, in particular around the Quinlan Veins which we intend to drill test this spring. Exploits is well funded, drill ready and positioned for growth on drilling a discovery in the Exploits Subzone.”

The claims are situated on the eastern side of Port Albert Peninsula and are interpreted to be found on secondary and tertiary structures that intersect the Appleton Fault on the western side of the claims. There are several historic mineral occurrences located on the properties as follows:

Horwood Bay Cu: A 30 – 45 cm quartz vein exposed for about 15 m, occurs on a small headland on the west shore of Dog Bay. The vein contains about 1% chalcopyrite along its entire length. Smaller quartz veins containing traces of chalcopyrite occur within a few hundred feet of the larger vein (Kalliokoski, 1953).

Gina Au Showing: The Gina showing occurs in a porphyritic felsic dyke that is moderately silicified and contains spotty sericite alteration with arsenopyrite and pyrite mineralization. The showing has yielded grades up to 3.6 g/t Au from grab samples and 3.6 g/t Au over 1.1 m from channel sampling.

The Beach Au Showing: The Beach occurrence has returned assays up to 6.4 g/t Au from grab samples. The occurrence occurs in approximately 20 cm wide quartz vein which contains arsenopyrite (Dyke, 2006).

United Church Showing: This occurrence has yielded assay results up to 3.8 g/t Au from grab samples and 1.6 g/t Au over 1.0 m from channel sampling. The occurrence is composed of a felsic dyke containing arsenopyrite and pyrite (Dyke, 2005).

Two of the northern claim Cells are proximal to Exploits’ Quinlan Vein showing where visible gold can be seen at surface, returning assays of up to 61.3 g/t Au and 189 g/t Ag. The Quinlan Veins consist of several 50 to 70 centimetre-wide quartz veins over a 25m wide zone, currently running 5 to 20 metres in strike length before diving under overburden. Visible gold was discovered as fine grains in crack seal fractures and as fine to coarse grains disseminated in the quartz veins. Structurally, the veins are situated within secondary fault structures, associated with the Appleton Fault zone, that were highlighted by GoldSpot Discoveries’ (TSX.V: SPOT) (“Goldspot”) geophysical analysis. The Quinlan Vein targets are deemed analogous to New Found Gold’s Keats Zone due to the similarities in structural control and lithological host units.

Area Map of the Exploits Aquisition 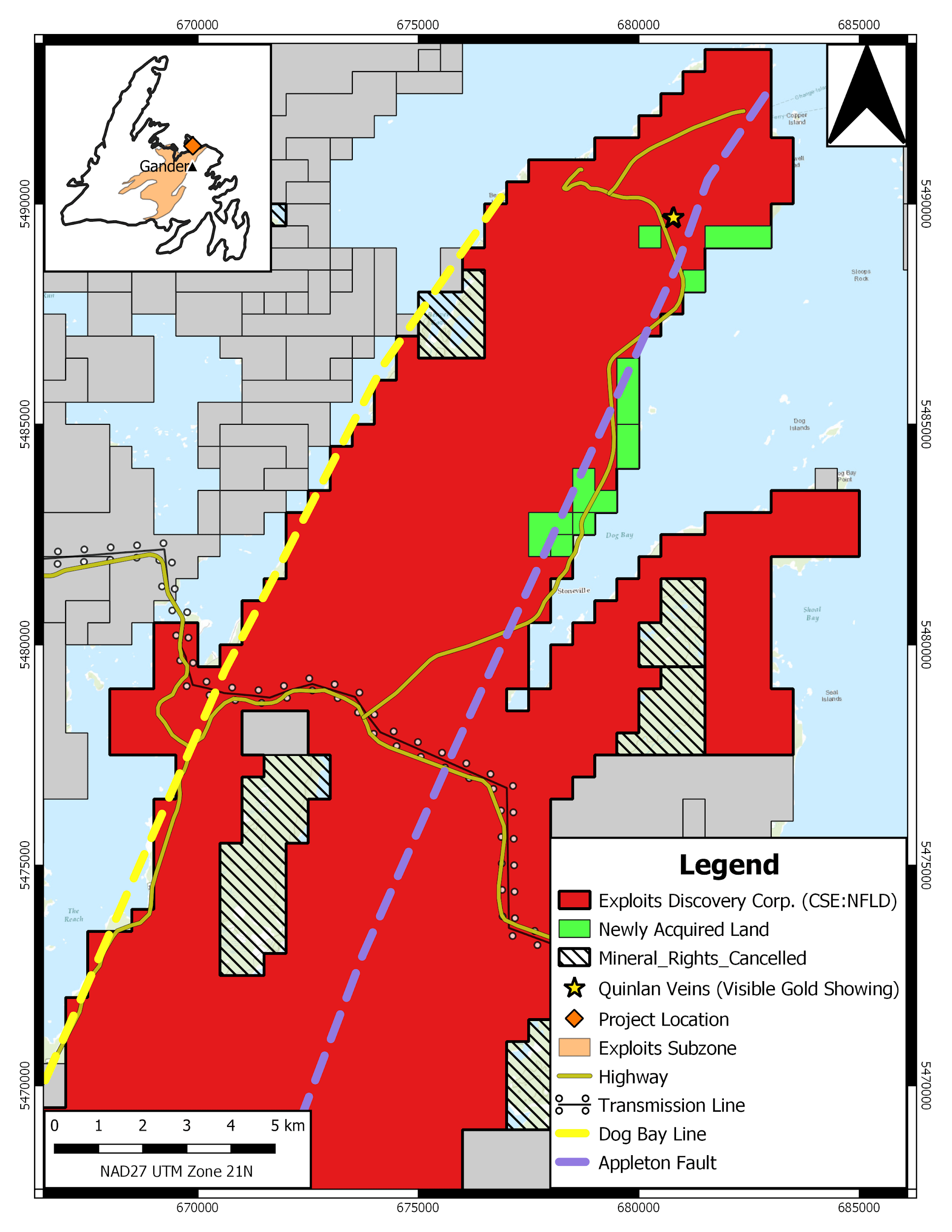 The purchase agreement increases the Dog Bay Project to 1,272 mineral claims, encompassing a total land area of 318 km², straddling the northern extent of both the Appleton Fault Zone and bound to the west by the Dog Bay Line.  The project can be accessed by travelling north on highway 340 from Notre Dame Junction, where further access is gained by traveling inland on a network of well-maintained forest service roads. The project boundary is also situated 40 km northeast of the late 2019 New Found Gold Corp. gold discovery, which returned a diamond drill hole with 92.86 g/t Au over 19.0 meters near surface (see New Found Gold Corp. news dated January 28, 2020), and is underlain by the same fault zones and similar packages of siliciclastic rocks as the discovery host, as mapped by the Newfoundland and Labrador Geological Survey.

Exploits believes that the Exploits Subzone, which runs 200 km from Dog Bay southwest to Bay d’Espoir, has been neglected since the last major exploration campaigns in the 1980s. The last 40 years have seen incremental advancements in the understanding of gold mineralization in the camp. The sum of this knowledge is now coming together in discrete and effective exploration models that have delivered discovery such as New Found Gold’s 2019 discovery of 92.86 g/t Au over 19.0 metres near surface. The Exploits Subzone and GRUB regions have been the focus of major staking and financing throughout 2020, with increased exploration activities forecasted in the area moving into 2021.

Telecom Industry will Continue to Shrink Despite 5Gs Emergence but Webscale and Carrier-Neutral Sector will Rescue Telco Margins and Lift Industry Capex - ResearchAndMarkets.com