What we have done:

Where we are going:

Michael Collins, president and chief executive officer of Exploits, commented: “Exploits exploitation strategy is benefiting our shareholders.  In only 6 months we have defined and filed drill permits on 5 projects. With our first permit at True Grit we have defined 3 new targets. That is based on a synthesis of new and old geological information by some of the best minds and A.I. in the business. We look forward to drilling at True Grit and applying our exploration model to the next 4 projects.” 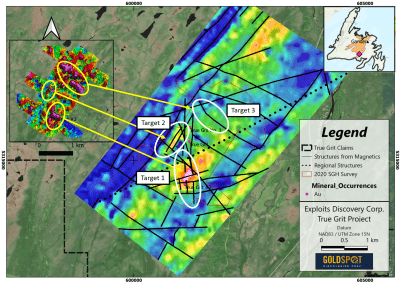 The True Grit Project is host to the deep seated GRUB Line fault zone, a known conduit for gold mineralization and gold bearing fluids across the Exploits subzone. The preliminary results have identified a structural pattern of primary and secondary fault structures associated with the GRUB Line, similar to structures Goldspot identified on New Found Gold’s Queensway South project.

Current evidence suggests that historical exploration drilling took place on the fringe of the identified targets and the gold intercepts discovered to date are potentially distal to the main mineralized bodies.

Target 1: 3D geological modeling of the historical drilling at True Grit indicates that veining may have a spatial/geometric association with metasediment rock units, coincident with north-south EM conductors. This target was poorly tested by shallow historic drilling that missed both the EM-sedimentary rock hosted anomaly as well as the SGH/Magnetic anomaly. This suite of features are usually expressed by rocks that have been broken up and subject to fluid flow. This structural preparation gives the host rock a higher capacity to host significant gold mineralization than the adjacent areas of known gold mineralization on the True Grit Project. 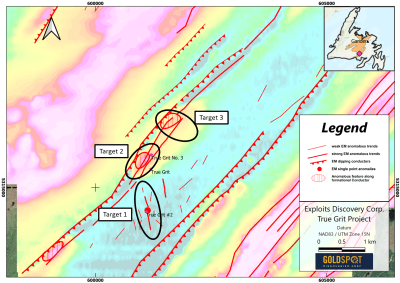 Untested Targets 2 and 3, were identified on a conductive northeast trending EM anomalies along a major fault structure.

Target 2: is a coincident  magnetic high and conductive EM anomaly, overlaid by intersecting major north trending and northeast trending faults to the north of known low grade gold mineralization. It is the strongest of the three highlighted EM conductors and has the structural complexity to develop open spaces required for deposition of gold mineralization.

The True Grit property is 100% owned by Exploits Discovery, subject to a 2% royalty with a 1% buy back for $1 million. It i s easily accessible, located only two km west of the junction of the Harbour Breton (Route 360) and St. Alban’s highways (Route 361) in the Baie d’ Espoir area of Newfoundland’s Exploits subzone.

Exploits believes that the Exploits Subzone, running 200 km from Dog Bay southwest to Bay d’Espoir, has been neglected since the last major exploration campaigns in the 1980s. The last 40 years have seen profound advancements in the understanding of gold mineralization in the camp. The sum of this knowledge is now coming together in discrete and effective exploration models that have delivered discovery such as New Found Gold’s 2019 discovery of 92.86 g/t Au over 19.0 metres near surface. The Exploits Subzone and GRUB regions have been the focus of major staking and financing throughout 2020, with increased exploration activities forecasted in the area moving into 2021.

Snapshot of Germany's Railway Market, 2020 Dossier - Looks at the Efforts Made to Make Up the Investment Shortfall Arising from COVID-19 and Drive Forward Innovation - ResearchAndMarkets.com