Exploits Discovery Corp.  (OTCQB: NFLDF) (CSE: NFLD) (FSE:634-FF) (CNSX:NFLD.CN) is pleased to announce that the Company has received full permitting from the Newfoundland and Labrador Government for drilling the Quinlan Vein prospect at the Dog Bay Gold Project, Newfoundland.

Michael Collins, President and Chief Executive Officer of Exploits, commented: “With the drill permit now secured for our Quinlan Vein prospect, Exploits is pleased to now have received four of its five drill applications. The Quinlan Vein prospect is an impressive piece of land with high grade, visible gold samples at surface and we are looking forward to unlocking its potential with the drill. Our 2021 exploration plans are taking shape with boots on the ground work to refine these targets, culminating in our Phase I drill campaign in May.”

Exploits has identified five discrete targets across their projects within the Exploits Subzone that are near drill ready status. These targets are the Quinlan Veins, True Grit, Little Joanna Veins, Schooner, and Jonathan’s Pond. To date, drill permits have been approved for the Quinlan Veins, little johanna, Schooner, and True Grit prospects totalling 33 holes for a combined length of ~8,250 metres.

One drilling application is still pending and is expected to be through the approval process shortly. 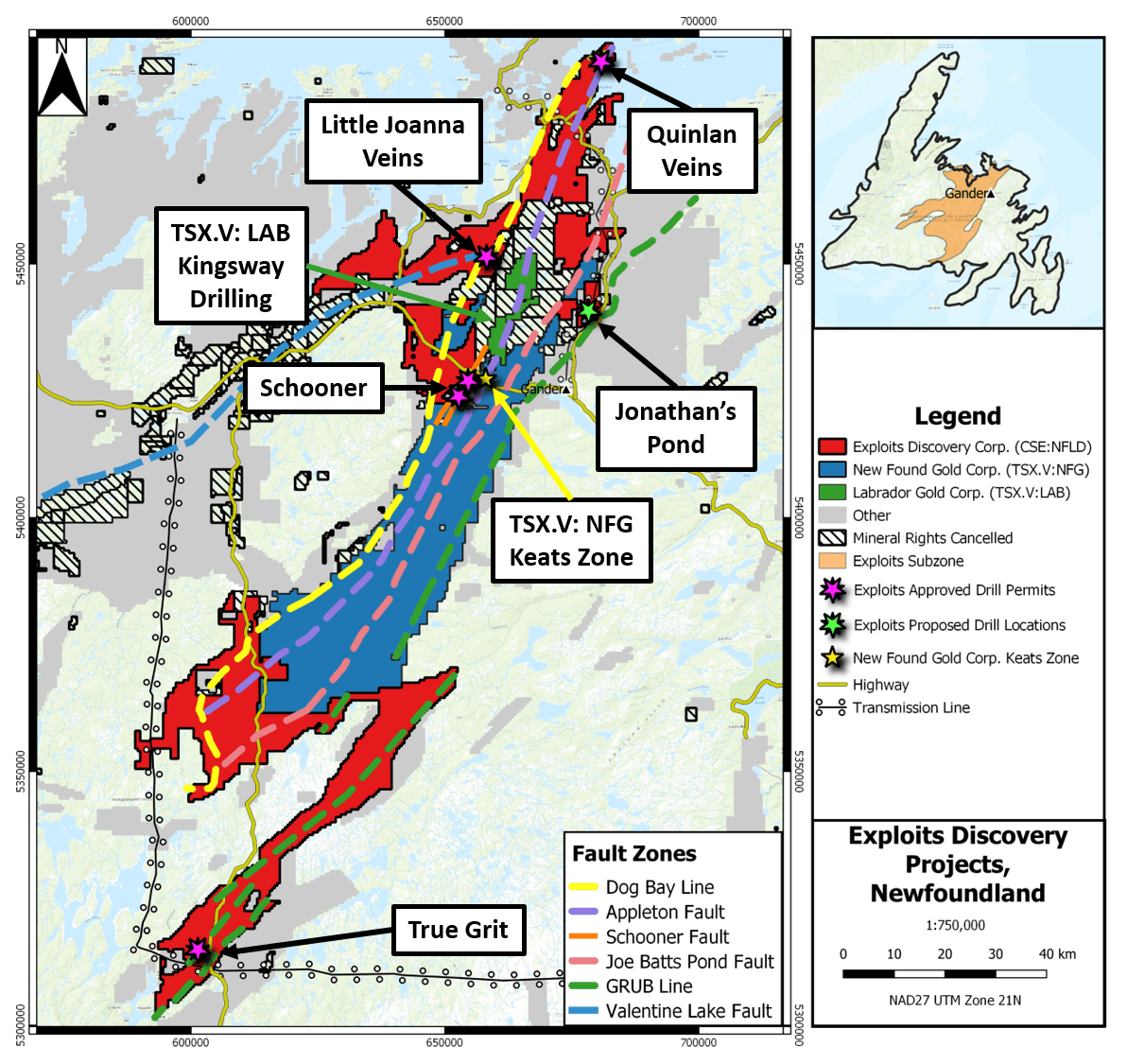 Figure 1: Map of the Exploits Discovery claim boundaries with the location of the approved Quinlan Veins, Little Johanna, True Grit and Schooner drill permits, as well as the location for the  Jonathan’s Pond drill applications.

Nine holes (2,250m) were approved for the Quinlan Vein prospect, targeting quartz veins with visible gold at surface, returning assays of up to 61.3 g/t Au and 189 g/t Ag. The Quinlan Veins are several 50 to 70 centimetre-wide quartz veins over a 25m wide zone, currently running 5 to 20 metres in strike length before diving under overburden cover. Visible gold was discovered as fine grains in crack seal fractures and as fine to coarse grains disseminated in the quartz veins. Structurally, the veins are situated within secondary fault structures, associated with the Appleton Fault zone, that were highlighted by GoldSpot Discoveries’ (TSX.V: SPOT) (“Goldspot”) geophysical analysis. The Quinlan Vein targets are deemed analogous to New Found Gold’s Keats Zone due to the similarities in structural control and lithological host units. 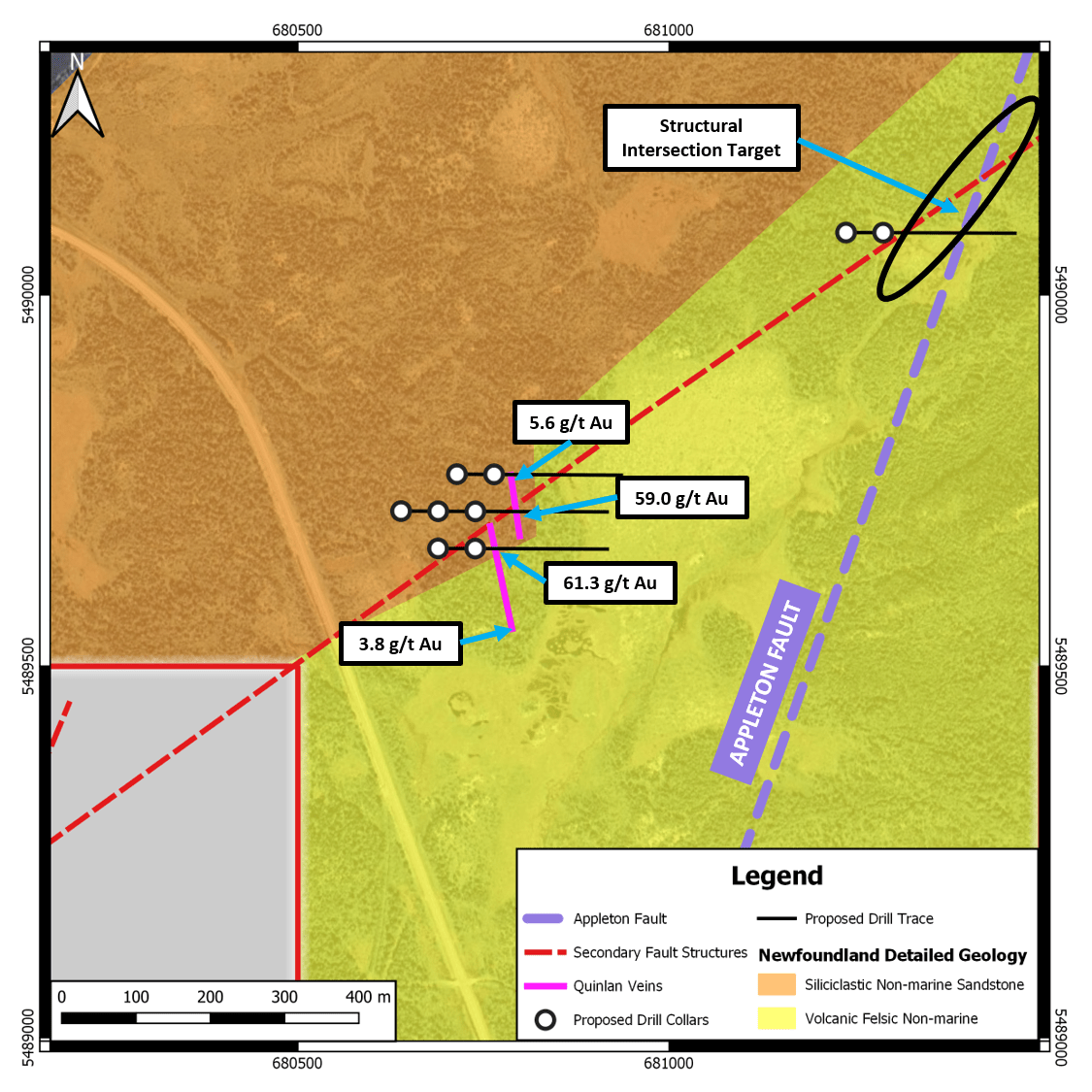 Figure 2: Geologic map of the Quinlan Veins prospect with proposed drill collars and identified gold in quartz veins (pink lines) and locations where samples up to 61.3 g/t Au were collected. The veins are believed to be associated with the Appleton Fault zone and its secondary fault splays, with the intersection identified by Goldspot being a high priority target as well.

Exploits believes that the Exploits Subzone, which runs 200 km from Dog Bay southwest to Bay d’Espoir, has been neglected since the last major exploration campaigns in the 1980s. The last 40 years have seen incremental advancements in the understanding of gold mineralization in the camp. The sum of this knowledge is now coming together in discrete and effective exploration models that have delivered discoveries such as New Found Gold’s 2019 discovery of 92.86 g/t Au over 19.0 metres near the surface. The Exploits Subzone and GRUB regions have been the focus of major staking and financing throughout 2020, with increased exploration activities forecasted in the area moving into 2021.