* sampling on adjacent properties may not be representative of results from Exploits claims.

Michael Collins, President and Chief Executive Officer of Exploits, commented: “The successful sampling campaign Exploits conducted in late 2020, coupled with the efforts of our inhouse team and partner GoldSpot Discoveries, has doubled our tier one drill targets to four across our projects in the Exploits Subzone. The Exploits team is excited to refine each high value target for drilling programs as we drive towards discovery in 2021.” 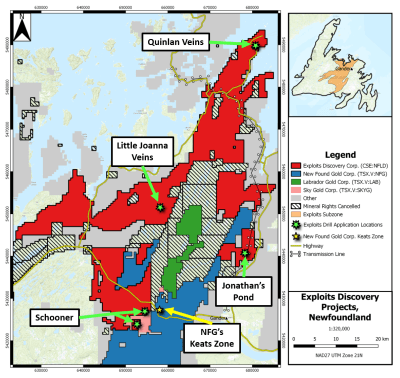 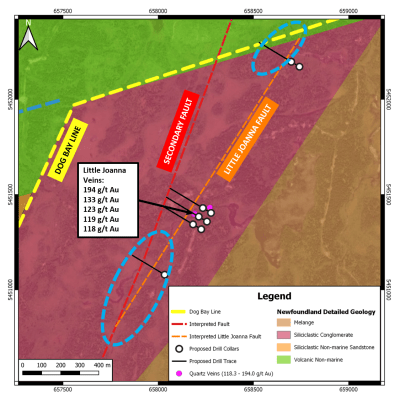 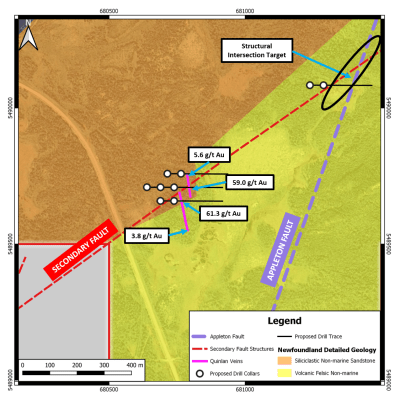 While the permitting applications are being reviewed, Exploits plans to refine each target with follow up field work. Ground geophysics, outcrop mapping, and trenching are being planned to fine-tune each target to be drill ready once the permits have been approved.

The Little Joanna Veins and Quinlan Veins are located within a series of claims optioned from Eddie and Roland Quinlan, (the “Quinlan Option”), on August 20, 2020 where Exploits can earn a 100% interest by paying $220,000 cash and issuing a further 2.5 million common shares and $560,000 in either cash or common shares.

All rock samples are collected by company personnel and bagged in the field with a sample tag for identification. The bags are sealed with tape and kept secure at a company facility until they are transported directly to the lab by Exploits staff.

All rock samples are analyzed at Eastern Analytical of 403 Little Bay Road, Springdale, NL, a commercial laboratory that is ISO/IEC 17025 accredited and completely independent of Exploits Discovery Corp. Eastern Analytical pulverized 1000 grams of each sample to 95% < 89 μm. Samples are analyzed using fire assay (30g) with AA finish and an ICP-34, four acid digestion followed by ICP-OES analysis. All samples with visible gold or assaying above 8.00 g/t Au are further assayed using metallic screen to mitigate the nugget effect of coarse gold , ( Nugget effect may cause a significant spread in resulting assay values using a 30 gram fire assay) . Samples in this report were run for Ore Grade Assay  with multi-acid digestion with AA finish for samples above detection limit for silver.

Exploits believes that the Exploits Subzone, which runs 200 km from Dog Bay southwest to Bay d’Espoir, has been neglected since the last major exploration campaigns in the 1980s. The last 40 years have seen incremental advancements in the understanding of gold mineralization in the camp. The sum of this knowledge is now coming together in discrete and effective exploration models that have delivered discovery such as New Found Gold’s 2019 discovery of 92.86 g/t Au over 19.0 metres near surface. The Exploits Subzone and GRUB regions have been the focus of major staking and financing throughout 2020, with increased exploration activities forecasted in the area moving into 2021.