Breaking News: Foremost Lithium Significantly Increases Its Footprint on Its Snow Lake Lithium Properties by an Additional 14,873 Acres or 130% with Acquisition of the Grass River Claim Block | Financial Buzz 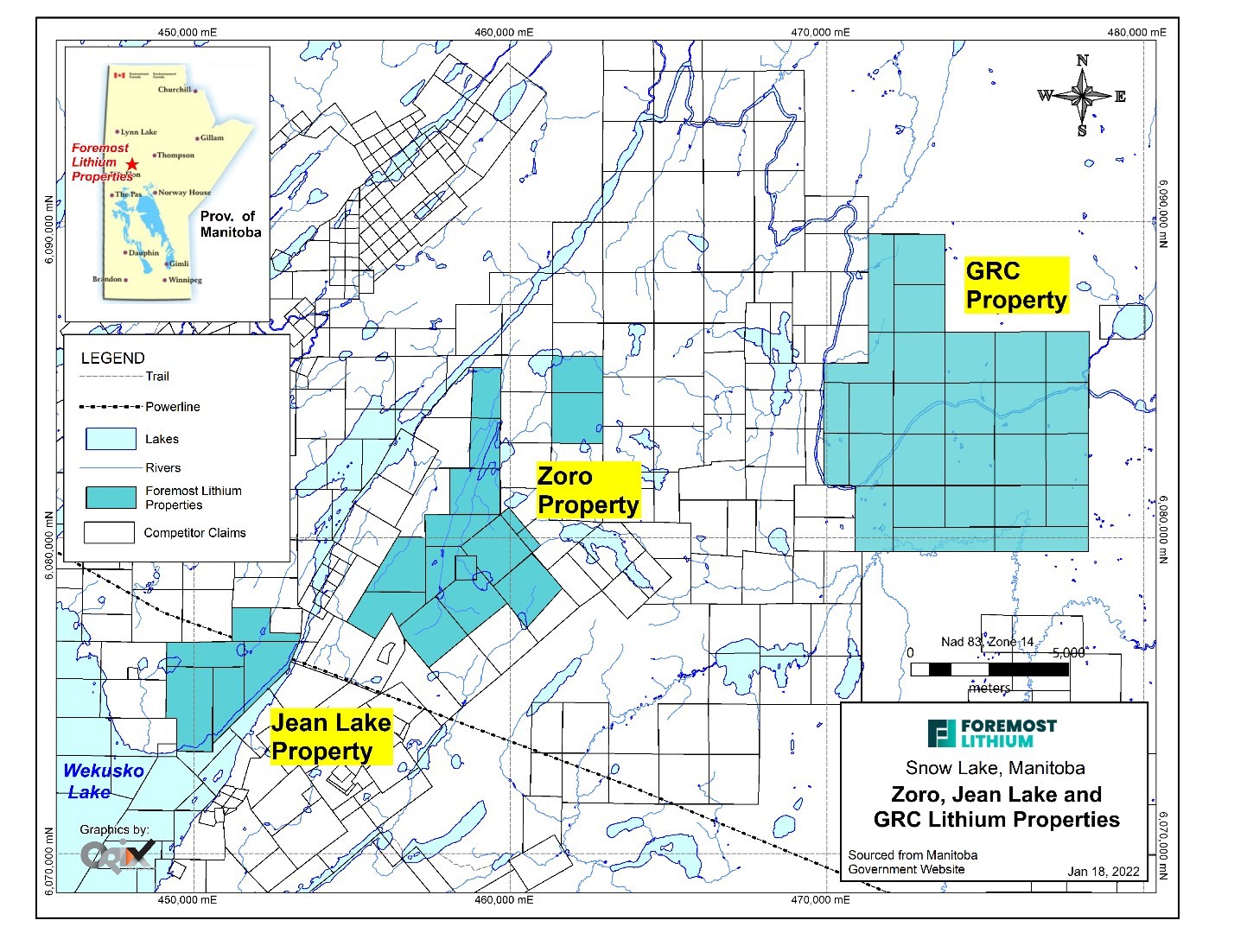 Figure 2 below details the location of the seven (7) historically drill-intercepted spodumene-bearing pegmatites. Dr. Mark Fedikow, Foremost Lithium’s QP, reviewed regional historical drill and exploration data in the Cancelled Assessment Files of the Manitoba Mining Recorder going back to the late 1950’s and documented multiple drill-indicated spodumene-bearing pegmatite dykes on the GRC. Spodumene-bearing pegmatite on the Grass River Claims, the Zoro property, the Jean Lake property and other lithium pegmatites in the general area such as those within the Thompson Brothers Lithium Trend are spatially associated with the regionally extensive Crowduck Bay Fault. 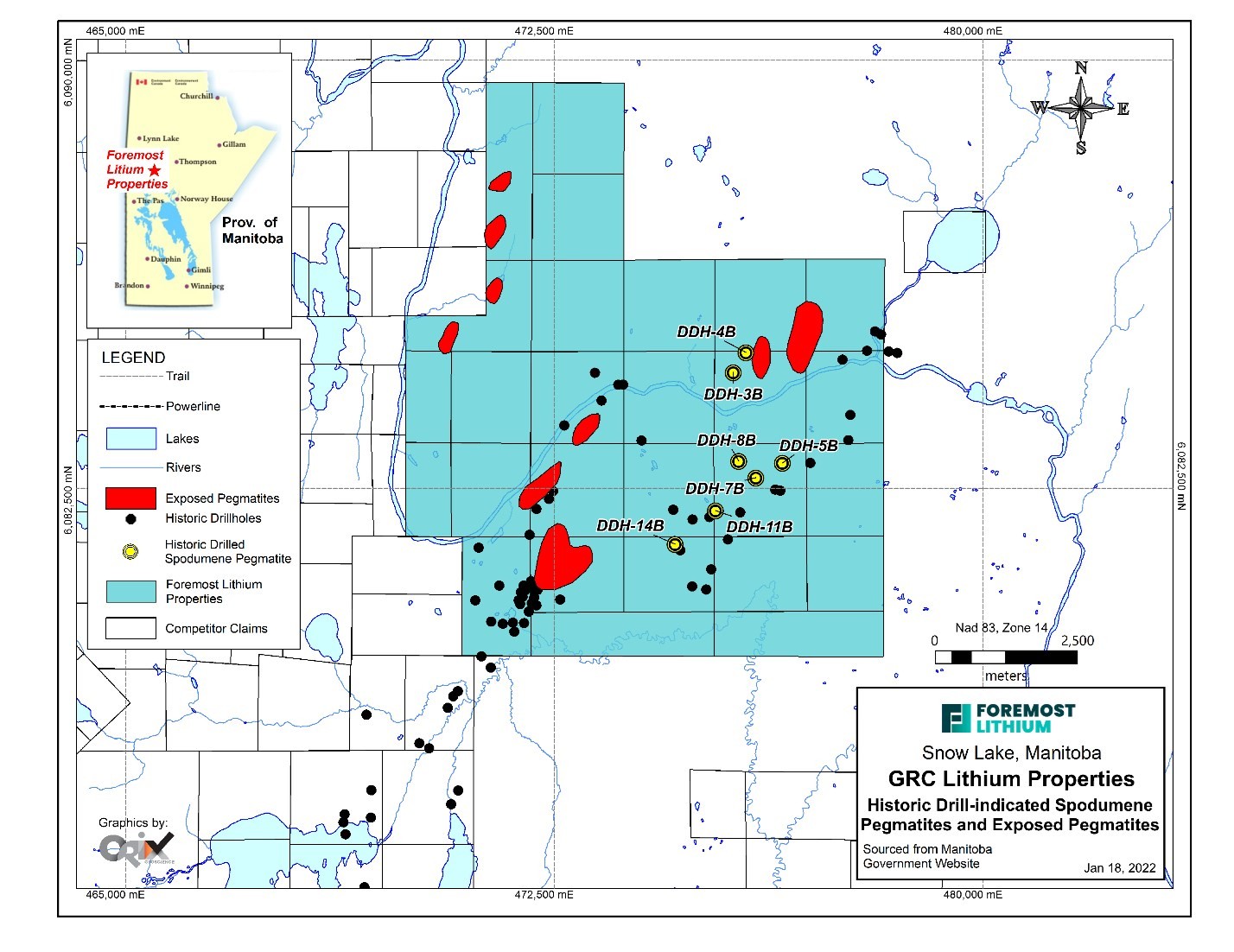 The location of exposed pegmatite in the northwest corner of the GRC claims and several large and undrilled pegmatites elsewhere on the property are also reflected in Figure 2.

The Company’s plans include moving forward with significant working-capital and utilizing modern geophysical and geochemical technologies to supplement boots-on-the-ground prospecting to further explore the GRC spodumene-bearing pegmatite dykes. Modern exploration on the GRC pegmatites has not been undertaken in more than 60 years.

Foremost Lithium will commence exploration on the GRC once the snow has melted and will proceed as follows:

Scott Taylor, President & CEO of Foremost Lithium, adds, “I woke up this morning with a big smile as I see this as a phenomenal opportunity to significantly increase the tonnage of our lithium resource, and deliver shareholder value. The acquisition of the Grass River Claims is a 130% increase in Foremost Lithium’s ground position in Snow Lake, and a material increase in the number of historically drill-indicated spodumene bearing pegmatite dykes on our property. I would also like to personally to express my most sincere gratitude to our team: Dr. Mark Fedikow, Jake Ziehlke Todd McCracken, and Brad Gogal (Gogal Air Services) who all worked tirelessly over the holidays in harsh winter conditions to stake and register these claims with the Manitoba Mining Recorder. Without such valuable and valiant team efforts, we couldn’t continue to deliver such milestone moments for our company and shareholders.”

Rystad recently indicated the price for lithium carbonate for batteries in China of 300,000 yuan per tonne, nearly 43% higher than the previous month’s 210,000, and an increase for lithium hydroxide from 192,000 to 290,000 yuan, with lithium carbonate price rising 43% in China month over month. The Global adoption of electric vehicles is accelerating and with this announcement of the acquisition of The Grass River Claims in Snow Lake Manitoba, Foremost Lithium continues to position itself as a contender in the lithium exploration landscape.

Technical information contained in the press release has been approved by the Company’s VP of Exploration, Dr. Mark Fedikow, , P.Eng., P.Geo, who is a “Qualified Person” within the meaning of National Instrument 43-101 Standards of Disclosure for Mineral Projects. Dr. Fedikow holds Honours B.Sc. and M.Sc. degrees in geology, geophysics and geochemistry from the University of Windsor (Canada) and a Ph.D. in exploration geochemistry from the School of Applied Geology, University of New South Wales in Sydney (Australia).

Coincidentally the Company would like to announce the following executive appointments:

Foremost Lithium is an energy tech company driven to being one of the first North American Companies committed to produce high quality battery-grade lithium hydroxide domestically to fuel the electric vehicle battery market. Given the importance and global focus on increasing energy decarbonization, especially when it comes to vehicles, The Company is hyper-focused in continued exploration and growth on its three lithium properties, Jean Lake and Zoro located in Snow Lake, Manitoba, and Hidden Lake in the Northwest Territories. Foremost Lithium also holds assets in precious commodities with its Winston Gold/Silver Project in New Mexico, USA.