The Company has been actively pursuing projects in the power/energy metals space, specifically Lithium, and is focusing its near-term efforts on two early-stage, highly prospective projects:  Dipole, in Newfoundland, and Bounty, in the James Bay region of Quebec.

Newfoundland’s pegmatite belt is over 450 kilometers in length and is analogous to the Avalonia Lithium Belt in Ireland and Kings Mountain/Piedmont Lithium Belt in North Carolina.*  Pegmatites have been identified in regional mapping of Newfoundland since the middle of the 1900s. During the mid-1960s, the Newfoundland government conducted two seasons of pegmatite surveys to evaluate their economic potential.  Beryl bearing pegmatites were mapped, but very little was known about the zonation of metals like beryllium, tantalum, and lithium within pegmatite fields.  Since then, significant amounts of new regional geochemical data have been released yet no modern-day lithium exploration techniques have been applied in this highly prospective region.

Manning Ventures Dipole Lithium project is a 997.3-hecatre project located approximately 50 kilometers along strike of the Sokoman/Benton Kraken Lithium discovery and within the Hermitage Flexure. The Hermitage Flexure is a regional-scale structural corridor containing volcano-sedimentary rock units, which are a favorable host-rocks for spodumene-bearing LCT pegmatites.  The Hermitage Flexure is thought to be the continuation of the aforementioned Avalonia to Kings Mountain/Piedmont Trends.

During the first half of 2022, Dahrouge Geological Consulting (“DGC”) completed a regional metallogenic study of southern Newfoundland and recommended the acquisition of The Property due to its prospective nature for hosting Lithium-Cesium-Tantalum type pegmatite- and/or tungsten mineralization.  The Property is host to several positive indicators for lithium mineralization.

Manning Ventures has completed ground surface sampling and reconnaissance program at the property with positive visual results, including pegmatite outcrops noted during the program.

Upon receipt of results from the reconnaissance program, Manning is planning an aggressive exploration program to fast-track exploration for lithium at the Dipole Lithium project. 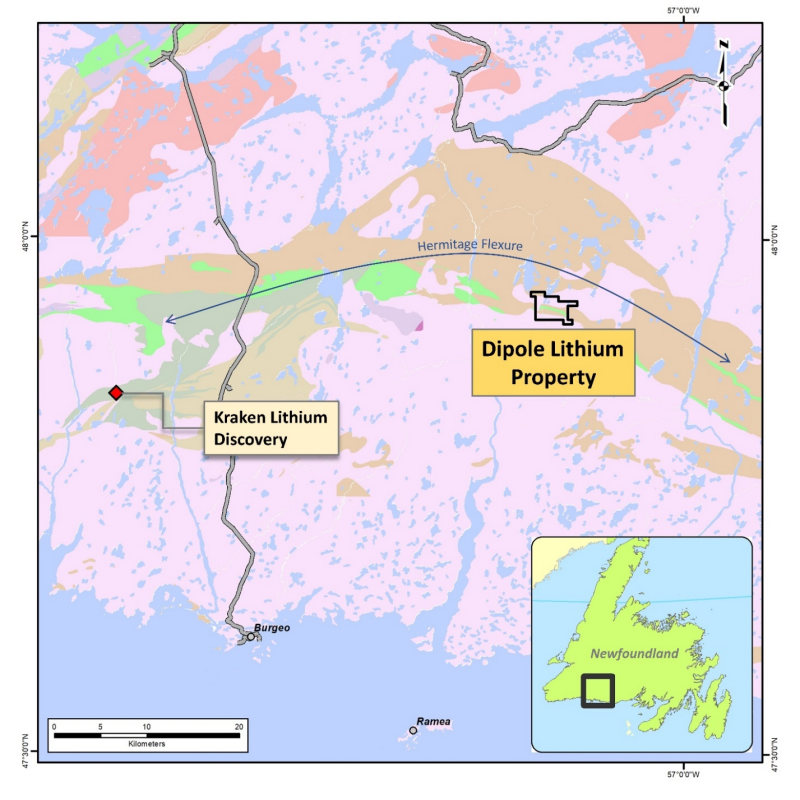 The Eeyou Istchee James Bay region is undergoing an exploration rush targeting lithium-bearing pegmatites.  Known discoveries in the region include:

Manning Ventures 100% owned Bounty Lithium Property is in the James Bay Lithium District of northern Quebec.  In 2020, the Property was selected as a result of a regional targeting method which included the review of pegmatite occurrences across Quebec with the appropriate indicator-mineralogy and indicator-chemistry for hosting spodumene-bearing pegmatites, within favourable host-rocks. The Property is host to several known pegmatite outcrops, but no lithium-focused work has been conducted on the Property, until recent work being conducted by Manning Ventures.

Earlier this year, the Company began a systematic reconnaissance program to map and sample pegmatites (see news releases dated May 13, May 31, August 3 and September 21, 2022) at Bounty.  The first phase of exploration work, wherein a number of pegmatite targets on the property were sampled, generated positive results.  Results included seven samples in the Very Anomalous category (greater than 201 ppm lithium) with up to 425 ppm lithium.  A further 16 samples came in at 81-200 ppm, showing that lithium is present and warranting aggressive follow up.

The spatial distribution of the very anomalous pegmatites, clustering in the center of the property, within the volcano-sedimentary country rock is thought to be a positive exploration attribute, given the deposit model within the James Bay Lithium District.  A brief follow-up program was conducted in October 2022 with analytical results still pending. 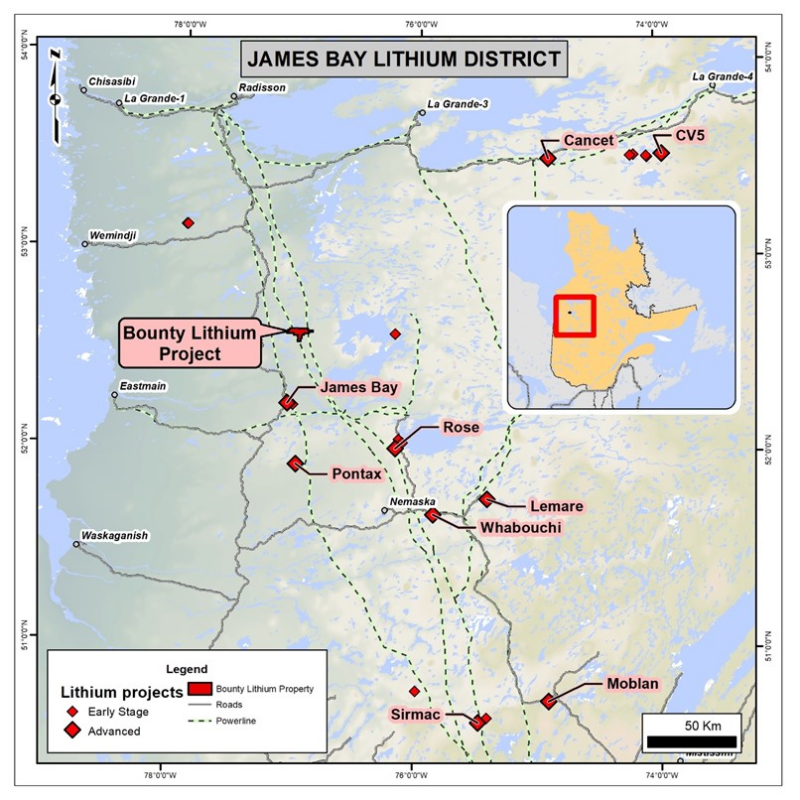 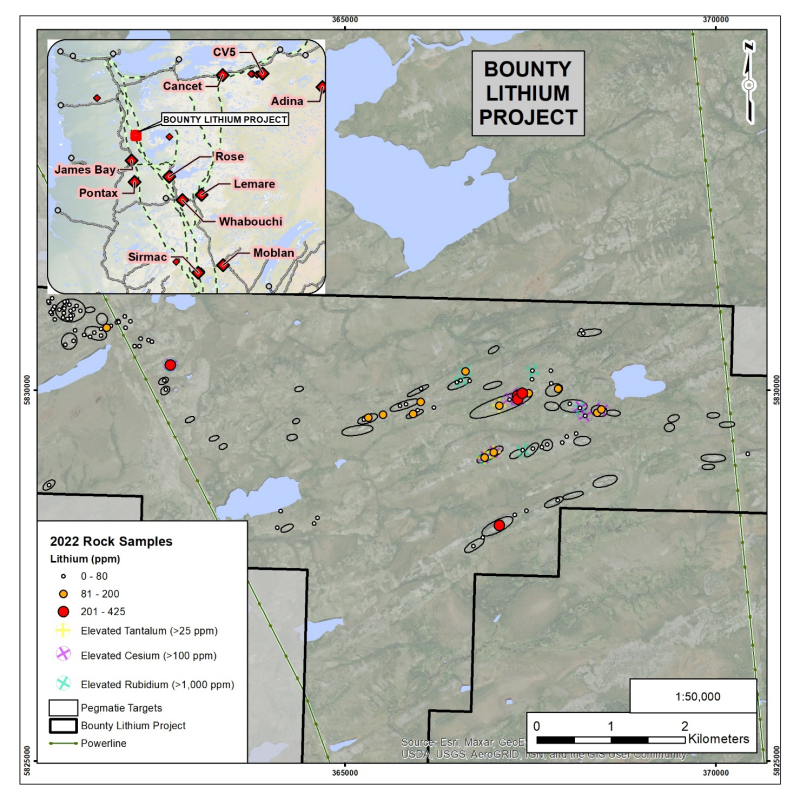 Alex Klenman, CEO, Manning Ventures states: “Lithium Mineral deposits are in very high demand and are receiving a generous flow of funds to expedite new discoveries.  Manning’s Dipole Lithium and Bounty Lithium projects are in the heart of two of the most prospective lithium belts in Canada and we are hyper focused on aggressively exploring and uncovering the lithium potential at these projects.  We expect the coming months to be a very active time with steady updates on the progress of these exploration efforts and we look forward to keeping our shareholders up to date.”

Neil McCallum, B.Sc., P.Geo., of Dahrouge Geological Consulting Ltd., supervised the preparation of the technical information in this news release.

Manning is a broad-based mineral exploration and development company with a focus in Canada. Manning holds a 100% interest in the Bounty Lithium Project, located in Quebec, and the Dipole Lithium Project, in Newfoundland.  The Company also retains interest in six Iron Ore properties located in the Province of Quebec, and portfolio of polymetallic projects in Newfoundland.