Reyna Silver Corp. (OTCQX: RSNVF) (TSXV: RSLV) (FRA: 4ZC) (“Reyna“) is pleased to announce high-grade silver and gold results from its late 2021 to mid-2022 surface and in-mine sampling program focused on the area surrounding the Silver Zone of the historic Batopilas District, Chihuahua, Mexico. Batopilas is believed to be the highest-grade silver system in Mexico’s history, having produced an estimated over 300 Moz of native silver from ores that averaged over 1500 g/t. Reyna’s work has identified a previously unrecognized gold overprint on the silver mineralization (See Press Release of April 12, 2022) and the results reported here reflect districtwide exploration to understand how that gold fits into the overall district mineralization history.

Out of nearly 1500 samples, over 10% report between 1.1 and 32.6 g/t Gold and 6% report between 199 and 14,170 g/t Silver. About 25% report a combination of Gold and Silver, with 16 samples returning over 1 g/t Gold plus over 100 g/t Silver together (Table 1 to 4). These results extend several known Silver Zone vein structures by 300 to 1200m and identify 3 new silver and multiple new gold-silver veins in the largely unexplored East Belt 2 kilometers away on the east side of the Batopilas river. Further, the geochemical results appear to indicate that there are two separate gold stages superimposed on the silver mineralization in different parts of the camp, which indicates at least 3 mineralization stages, a hallmark of large, long-lived mineralization systems. The sampling program reported here is complemented by a new district-scale magneto-telluric (MT) geophysical survey and a detailed structural reanalysis. The results from these three facets will be combined to define targets for the next round of drilling.

“Our results from applying modern exploration techniques into the underexplored parts of the historic Batopilas district reinforce our belief that exploration has only scratched the surface in Mexico,” said Jorge Ramiro Monroy, Pres and CEO of Reyna Silver. “We are very excited to see what the drill reveals next, not only in these new additions to the Silver Zone, but in the new East Belt gold zone in the eastern part of the district”.

Dr. Peter Megaw, Chief Exploration Advisor elaborated, “Finding the previously overlooked Teodoro Gold Zone last year launched a multifaceted field program to figure out how gold fits into the overall picture for this remarkable silver, now silver-gold district. Impressive gold values were encountered when we moved into the under-explored East Belt Zone across the Batopilas River and the overall results not only give credence to the developing Batopilas gold story, but highlight underexplored opportunities in the Batopilas high-grade silver zone as well. We are eager to drill the combination of these sampling results with the forthcoming geophysical results and the recently initiated detailed structural study”.

Geochemical results indicate at least two different sources for the gold mineralization, a hallmark of a large, very active and well-mineralized system. The gold-bearing structures in the East Belt Zone are structurally similar to the Teodoro Zone (previously identified as the NE Gold Zone). However, although at least one of the East Belt gold vein types is geochemically allied to the Teodoro Gold Zone mineralization, the other is distinctly different. Encountering this parallel, multistage gold mineralization, albeit over 2 kilometers away, gives credence to a developing gold story at Batopilas.

Table 1. Highlights from each style of mineralization: Silver, gold, and silver-gold. 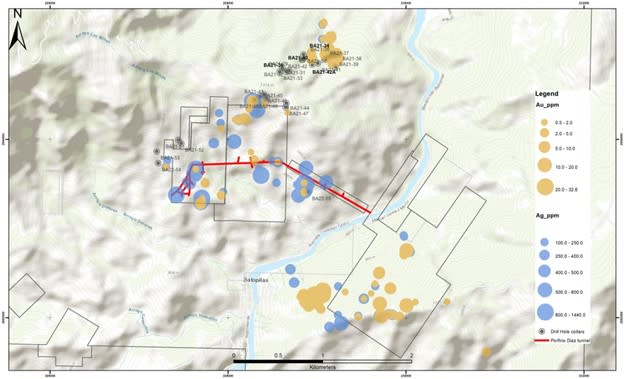 Figure 1. Map of the Batopilas District showing location of Selective Sampling survey results. Gold is in yellow, and Silver is in blue. The Porfirio Diaz Tunnel is in red. The location of drill holes from Phase 1 are in green, with the standout holes (BA21-30, 34 and BA21-40 and 42A) in black.

The sampling program reported here stems from 2021-2022 geologic work and drilling that identified significant gold and mixed silver-gold mineralization outboard of the district’s historic high-grade silver center. That work dramatically increased the district footprint and highlighted additional areas with potential for new gold and silver veins and extensions of previously known veins. Sampling was performed along surface traverses guided by strong geological lineaments identified in satellite imagery, projections of structural trends recognized in old mines and zones where overlooked veins were suspected. A total of 1,458 samples were collected and submitted for assay with appropriate control duplicates, standards and blanks. At least 25 percent of the samples reported either strong silver or gold anomalies or combined silver-gold anomalies.