Coca-Cola (NYSE: KO) is introducing a brand new flavor to its portfolio, Starlight, after having discontinued half of its drinks just a couple of years ago. The new drink is meant to be a limited-edition, zero-sugar version of the original soda.

Starlight is officially the first beverage to be created by Coca-Cola Creations, the company’s new innovation platform. However, it is unclear how the drink will taste as it is unlike the usual “cherry” or “vanilla” flavors. 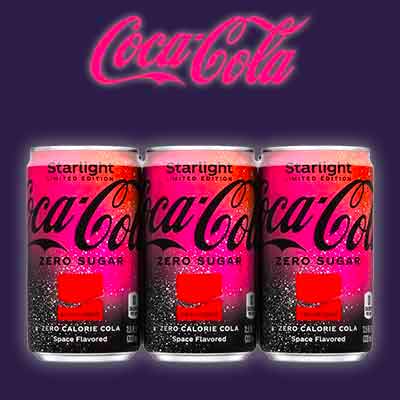 Starlight, which will be released on February 21, is inspired by the concept that “somewhere in our universe, another kind of Coca-Cola… might exist.” The drink is said to add a cooling sensation and reddish tint to its classic taste. Additionally, the packaging design has a multi-dimensional light-filled star field and an augmented reality. Starlight will come in 20 ounce, individual bottles as well as a 10-pack of 7.5 ounce mini cans in the U.S.

The beverage will be given full promotional treatment, including a digital marketing campaign headlined by pop singer Ava Max.

“Coca-Cola Starlight takes people on a journey in the same way that music has the ability to transport listeners to new worlds with each song,” said Max herself. “It’s been exciting to collaborate with Coca-Cola on this project. We wanted to create an other-worldly experience – through technology.”