United Nations Secretary-General, António Guterres, spoke of the alarming numbers around global food insecurity in a meeting at the UN Headquarters in New York. Now, the global hunger level has doubled from 135 million pre-pandemic to 276 million in 2022, “more than half a million people are living in famine conditions – an increase of more than 500 percent since 2016”, according to the UN. 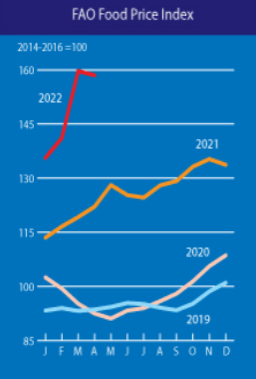 The rise in hunger is explained by the economic shock caused by the COVID-19 pandemic, the war in Ukraine that decimated grain supplies, as well as the decline in Russian fertilizers key to farmers around the world. An additional pressing factor is climate change, which has affected 1.7 billion people over the past decade.

Food prices in March this year were 29.8% above their value in the corresponding month last year, as reported by the Food and Agriculture Organization (FAO). In the same manner, cooking oils, fuel, and fertilizer prices are soaring globally, while the increase in rice prices could impact billions of people in Asia and the Americas.

During the meeting, António Guterres called on countries to act. “Ending hunger is within our reach. But unless we solve this problem today, we face the specter of global food shortages in the coming months… Our only chance of lifting millions of people out of hunger is to act together, urgently and with solidarity,” he said.

In his remarks, he emphasized the importance of peace negotiations with Russia, the development of social protection systems, and the financing coming from generous investments from international financial institutions. These measures could help developing countries access the liquidity that can provide for their population and prevent debt crises while combating global hunger.

Is a Recession at the Door?