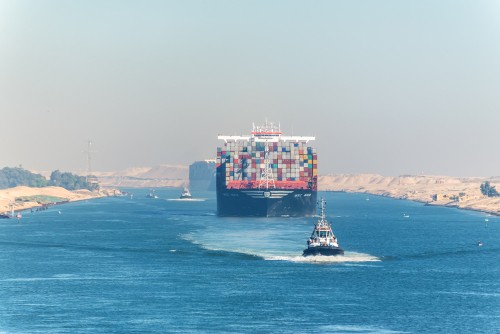 Yesterday the MV Ever Given, a cargo ship sailing through Egypt lodged itself sideways in the Suez Canal and is currently stuck. For those who might not know, the Suez Canal is a major global trade route, as it is the shortest trade route between Asia and Europe. The ship is about 1300 feet long, weighs a whopping 247,000 tons, and is currently holding about 20,000 shipping containers. An official in the neighboring country of Israel described navigating a ship of that size through the canal as being “like brain surgery”. All it took was one gust of wind to push the ship slightly off course which has now resulted in a major blockage of global trade.

About 150 other trade vessels are currently stuck in the MV Ever Given’s wake and waiting to pass. Currently it is estimated that roughly 10% of all global trade has been halted due to the blockage which is generating about USD 9 Billion a day in losses. As the blockage continues, there will be a shortage of many products used around the world, even things such as toilet paper. Of course due to the shortage of goods, companies will have to raise their prices of their products to cover their losses. It’s also estimated that about 5% of the world’s oil is shipped through the Suez Canal, which could be enough to cause a spike in already rising gas prices.

As operations to dislodge the ship are currently underway, it is believed that it could take days or even weeks to complete. Methods that could be used include digging out sand from underneath the ship or even emptying the ship’s fuel tanks to make it lighter. Mohab Mamish, an advisor to Egypt’s President, gave a more optimistic timetable as to when the operations could be completed stating they could take between “48-72 hours maximum”. If nothing is done soon, this blockage will have major implications for the global economy.