Kia (OTCPK: KIMTF) just unveiled its new 2023 Niro hybrid lineup and EV crossovers as well as improvements to its extremely popular Telluride SUV. The automaker had previously disclosed the design overhaul featured in the second generation Niro, though we now know much more about the vehicle and what consumers can expect when it goes on sale this fall.

The lineup consists of all-electric, plug-in hybrid, and traditional hybrid variants, which have all been redesigned for the vehicle’s second-generation models. Furthermore, they also feature additional safety convenience features such as a 10.25-inch control and information screens for drivers. 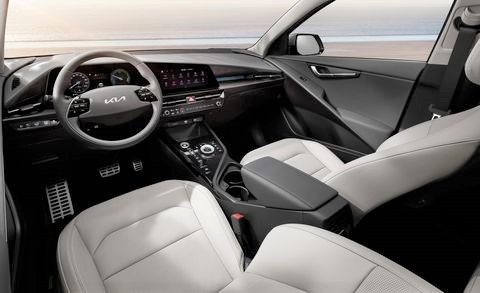 “Inside and out, the 2023 Niro features a bold design inspired by the ‘Opposites United’ philosophy that infuses inspiration from nature with aerodynamic refinement. The exterior of the 2023 Niro embodies a sophisticated and adventurous sense of purpose that takes strong influence from the 2019 HabaNiro concept” Kia detailed when describing the new EV.

The Niro hybrid is believed to attain 53 mpg combined and a driving range of approximately 588 miles. Meanwhile, the Niro EV has an electric range of 253 miles, though other automakers are offering vehicles with a range of over 300 miles.

“Kia’s electrified vehicle momentum continues with the launch of the all-new second-generation Niro, which offers more refinement, versatility, connectivity, and technology than ever,” said Kia America COO Steven Center in a statement. “The 2023 Niro was designed for today’s needs and for sustainable future mobility.”