McDonald’s (NYSE: MCD) has experienced “very healthy” sales of its plant-based McPlant burger and plans to expand the plant-based meal, made with Beyond Meat, within the United States in 2022, Wall Street analysts say. The fast-food chain tested the McPlant burger in eight U.S. restaurants after having trialed it in several markets abroad. Beyond Meat’s shares rose 9.1% following the news.

According to BTIG restaurant analyst Peter Saleh “following several channel checks over the past couple of weeks, we believe the McPlant product with Beyond Meat is performing well at the handful of restaurants offering it, warranting a more expansive market test in early 2022.” 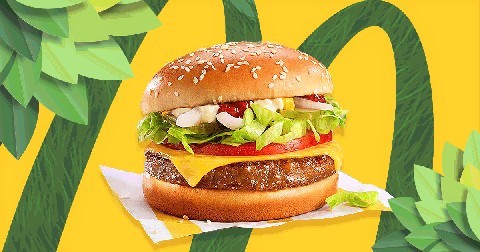 Additionally, Piper Sandler analyst Michael Lavery upgraded Beyond Meat from underweight to neutral as well as increasing his price target from USD61 to USD64.

Within the current 8 trial U.S. locations, the restaurants have been selling as many as 70 sandwiches per day, enough to incentivize an expansion. Nevertheless, Mcdonald’s and Beyond Meat have refused to comment on the matter.

“We expect Beyond Meat and McDonald’s to support the broader test with local/regional advertising, likely boosting the sales volumes north of 70 units/day. That said, test market and launch volumes are always higher than what can be achieved at a steady-state over time, and we expect these sales volumes to moderate considerably over time,” Saleh noted.

Competitors have been steering towards more vegan and vegetarian menu options. Beyond Meat also teamed up with Taco Bell owner Yum Brands Inc, meanwhile Impossible Foods has been working with Burger King for several years.