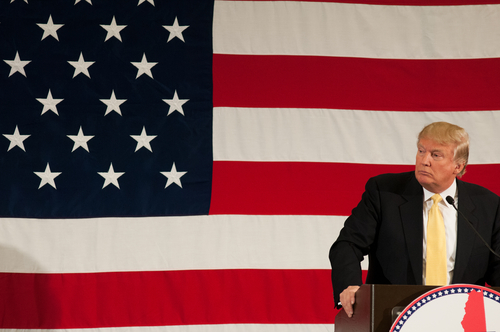 As the caravan of immigrants travels ever northward toward the southern border of the United States, and military troops being sent there to meet them, we wonder what may happen when the two forces collide. According to President Trump in a teleconference on Thursday, the military guarding the border now has the authority to use lethal force on migrants attempting to cross into the United States.

When asked what the military is to do about migrants at the border, Trump said “If they have to, they’re going to use lethal force.  I’ve given the okay.” Continuing to discuss why he has given the order “I hope they don’t have to.  But, you know, you’re dealing with a minimum of 500 serious criminals.  So I’m going to let the military be taken advantage of.  I have no choice.  Do I want that to happen?  Absolutely not.  But you’re dealing with rough people” added the President.

According to the President, the caravan has become violent in the city of Tijuana, attacking the residents and starting fist-fights with those who have attempted to aid the migrants. While the legitimacy of these claims is uncertain, we still have to understand the potential for violence when the caravan arrives at the border. Though there may be criminals in this caravan, many innocent migrants can get caught in the crossfire.

The only threats that the President has made up to this point, regarding the caravan, is when he had threatened to cut foreign aid for Central American countries for their inability to stop the caravan’s progress throughout the region. Threatening countries like Honduras and Guatemala, two countries where much of the caravan members came from, that their failure will cost them financially.