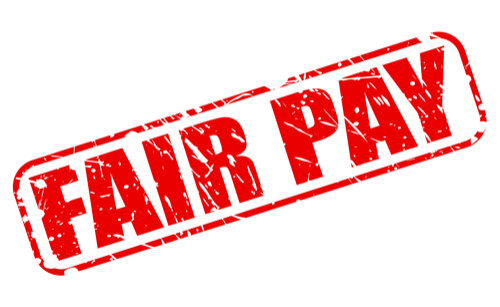 Transportation Security Administration airport screeners and other agency employees will receive partial pay, the TSA said Friday, an attempt to tide over some of the lowest-paid federal workers who have been without regular paychecks since the partial government shutdown began more than a month ago.

The pay, which will amount to a little less than half of a paycheck, according to a TSA spokesperson, comes after a spike in absences of TSA officers, which has led to closed checkpoints and long lines at some of the country’s busiest airports.

The TSA officers are among the the 420,000 federal employees deemed essential and ordered to work during the shutdown, which began on Dec. 22. That group also includes air traffic controllers, federal aviation safety inspectors, FBI agents, federal food safety inspectors, and others.

The TSA is using unlapsed funding and workers should receive the money on Friday or early next week, spokesman Jim Gregory said. The pay corresponds to the last pay period of 2018.

There was not enough to offer air marshals partial pay, but they may receive bonuses instead. TSA gave USD 500 to its officers earlier this month. Screeners missed their second regular paycheck on Friday.

The move underscores the growing concern about how the longest-ever government shutdown is set to disrupt air travel.

Airline executives this week fretted that travelers could face long airport lines, delays and canceled flights as the impasse between President Donald Trump and legislators over funding for a wall along the U.S. border with Mexico continues.

“We are increasingly concerned about the shutdown’s consequences for convenient and efficient air travel and for the economy overall,” JetBlue Airways Chief Executive Officer Robin Hayes said on an earnings call Thursday. “We are close to a tipping point, as many of these (federal) employees are about to miss a second paycheck.”

Aviation workers — including flight attendants, pilots and federal air traffic controllers — said in a joint statement this week that they are worried about safety risks due to the shutdown. They said the impasse threatens to further thin the already stretched ranks of air traffic controllers and derail hiring for new employees.

Breaking News: SourcingLink.net Plans to Use 'Game Changing' Diagnostic Tool in its R&D and Beyond