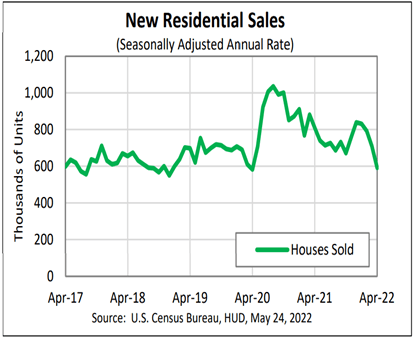 Recent data have pointed to a slowdown in the housing market; the sales of new homes decreased by 16.6% in April this year, as reported by the U.S. Census Bureau of Department of Housing and Urban Development. The drop in sales can be explained by higher mortgage rates, overvalued houses, and the possible increase in unemployment rates in the near term.

The Fed’s contractionary policies are increasing interest rates to fight inflation, and although the Federal Reserve does not set mortgage rates, it does influence them. Only during the past five months, rates have climbed from 3.11% to 5.25%, which in turn discourages homebuyers and decreases demand for houses.

An additional reason for the cooling down includes the “overvalued” housing market. According to Moody’s Analytics, “97% of U.S. cities are overvalued, and real estate in some of the most overpriced regions could fall by 10% over the next few years.”  High housing prices can be explained by the boom in the market during the pandemic. To save the economy in 2020 monetary and fiscal policies helped push mortgage rates to an all-time low. Just in January 2021, the most popular home loan product namely the 30-year fixed-rate average reached 2.65%. The less expensive borrowing incentivized buyers to spend more on housing, as well as the new work-from-home lifestyle, the peak period of the first-time homebuying population aged 30-years, millennials born between 1989 and 1993, and the high performance in stock markets, which lead investors to cash into real estate.

However, the past few months have shown that the housing market is going on a different trajectory than it has during the pandemic. Compared to 2021, April sales were down 26.9%, the fourth consecutive month of decline. The high mortgage rates aligned with the high housing valuation, and the fear of an upcoming increase in unemployment rates is scaring away buyers and colling the housing market.

5 Easy Ways to Take Control of Your Personal Finances