Volkswagen (OTCMKTS: VWAGY) plans to launch a commercial self-driving retro-styled van in Germany by 2025. The automaker’s van will be built with hardware and software developed by Argo AI, a Pittsburgh startup. Testing for the ID.Buzz models will commence this summer in Munich, according to the company.

“Our aim with the self-driving version of the ID.Buzz is to facilitate commercial deployment of transport and delivery services starting in 2025,” Christian Senger, head of autonomous driving at VW’s van unit, said in a press release. 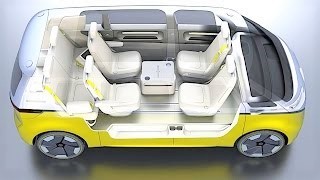 The ID.Buzz design is anticipated to have Level 4 autonomy, meaning drivers will not be needed to operate the vehicle. However, the models will only function within certain limits like geofenced areas or specific routes. The capabilities are similar to the fully autonomous modes of Level 5.

“We’re building our technology and partnering with Volkswagen in a way that really sets us apart from what others are doing,” said Bryan Salesky, Argo’s founder and CEO. “And we think it really puts us in a position to deliver a safe, smart, and scalable product to deliver on the promise of autonomous driving.”

According to Volkswagen, it plans to use the vans to run a ride-sharing fleet under its subsidiary Moia. Moia has been managing a group of electric vehicles for “ride-pooling” in Hamburg, with 3 million customers to date.

“We have learned in recent years that both customers and cities have really high and very specific expectations towards future autonomous ride-pooling systems,” says Moia CEO Richard Henrich. “Customers, on the one hand side, expect ride-pooling to be as easy, convenient, and reliable as riding their own car… But cities, on the other hand, expect ride pooling to help alleviate traffic congestion.”

Salesky recently revealed that Argo was considering an initial public offering some time “in the future.”

“We’ll be looking at an IPO in the future as well. I think that it’s one of those things where we don’t know the exact source we’re going to take the funding from next. We’re looking at a bunch of options,” he said.